ITV and LIME Strike Back In TOWIE Dispute

ITV and LIME Strike Back In TOWIE Dispute

In the battle over The Only Way is Essex,  ITV and Lime Pictures, represented by Manleys,  fired back a strong defence at the High Court against claims of copyright infringement and breach of confidence and the Claimants have lodged a Reply. Read the full story from Broadcast Magazine

ITV and Lime strike back in TOWIE legal dispute

ITV and Lime Pictures have hit back in the battle over The Only Way Is Essex, lodging a robust defence at the High Court against claims of copyright infringement and breach of confidence. 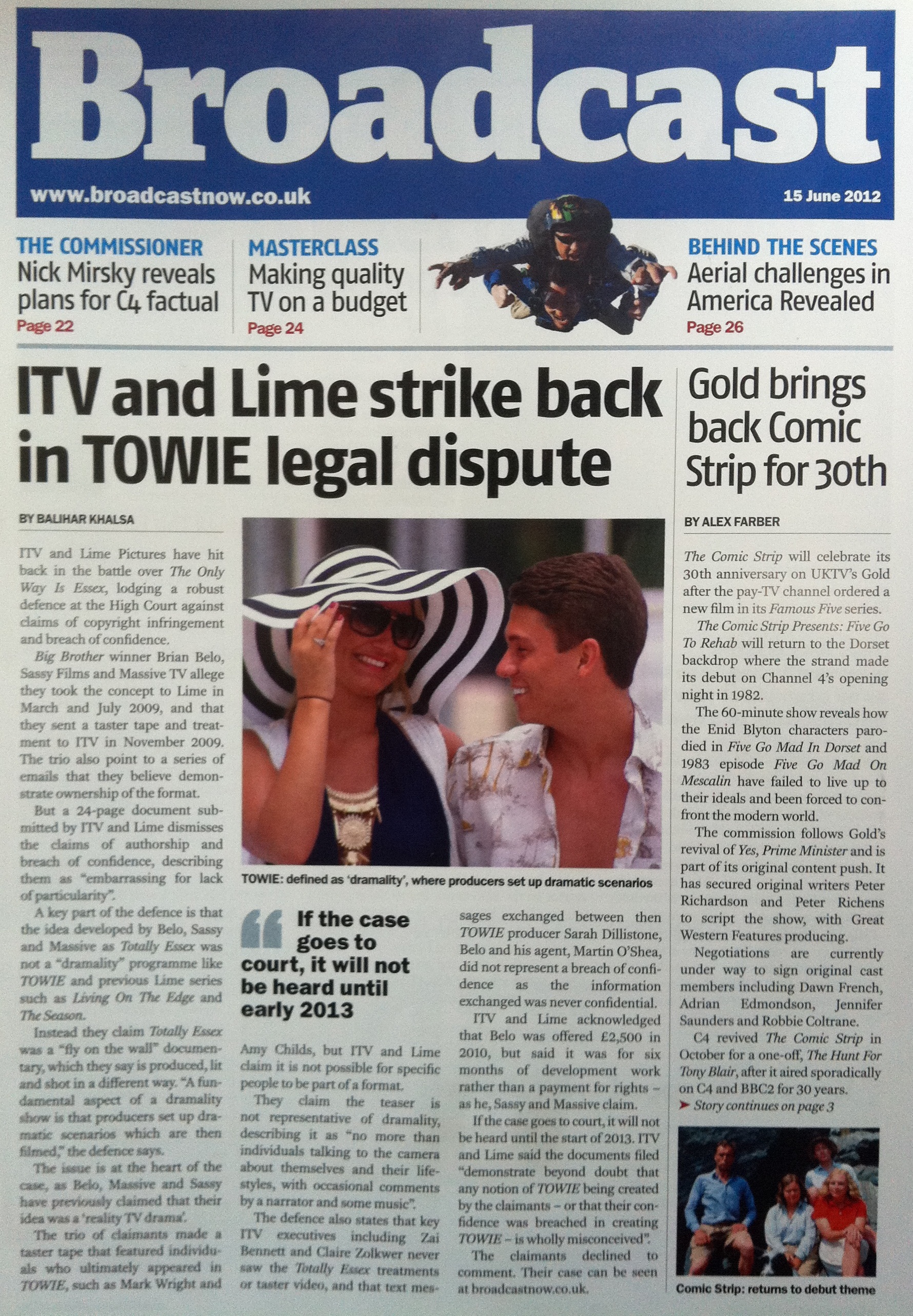 Big Brother winner Brian Belo, Sassy Films and Massive TV allege they took the concept to Lime in March and July 2009, and that they sent a taster tape and treatment to ITV in November 2009. The trio also point to a series of emails that they believe demonstrate ownership of the format. But a 24-page document submitted by ITV and Lime dismisses the claims of authorship and breach of confidence, describing them as “embarrassing for lack of particularity”. A key part of the defence is that the idea developed by Belo, Sassy and Massive as Totally Essex was not a “dramality” programme like TOWIE and previous Lime series such as Living On The Edge and The Season. Instead they claim Totally Essex was a “fly on the wall” documentary, which they say is produced, lit and shot in a different way. “A fundamental aspect of a dramality show is that producers set up dramatic scenarios which are then filmed,” the defence says. The issue is at the heart of the case, as Belo, Massive and Sassy have previously claimed that their idea was a ‘reality TV drama’. The trio of claimants made a taster tape that featured individuals who ultimately appeared in TOWIE, such as Mark Wright and Amy Childs, but ITV and Lime claim it is not possible for specific people to be part of a format. They claim the teaser is not representative of dramality, describing it as “no more than individuals talking to the camera about themselves and their lifestyles, with occasional comments by a narrator and some music”. The defence also states that key ITV executives including Zai Bennett and Claire Zolkwer never saw the Totally Essex treatments or taster video, and that text messages exchanged between then TOWIE producer Sarah Dillistone, Belo and his agent, Martin O’Shea, did not represent a breach of confidence as the information exchanged was never confidential. ITV and Lime acknowledged that Belo was offered £2,500 in 2010, but said it was for six months of development work rather than a payment for rights – as he, Sassy and Massive claim. If the case goes to court, it will not be heard until the start of 2013. ITV and Lime said the documents filed “demonstrate beyond doubt that any notion of TOWIE being created by the claimants – or that their confidence was breached in creating TOWIE – is wholly misconceived”. The Claimants declined to comment.